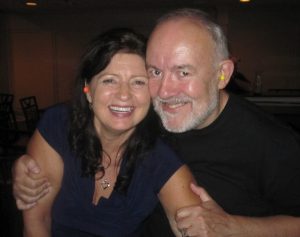 One year ago today, my Twin Soul, Jack Waldenmaier, passed away. We were all in disbelief. He and I agreed to ‘take it one day-at-a-time.’ We didn’t know how long the cancer would leave us. It was November and December of 2020. All of the children and grandchildren came to us. Every day, we told stories, cooked lots of great food depending on Jack’s request and spent time as a family. It was the perfect send off for Jack. His last conscious words to me were: “All of the love has been expressed. I’m ready to go.” He was gone in three days.

I pray the loss of my Soul Mate and my marriage is my final ordeal. I don’t think my grief will ever be ‘done.’ I believe it was his time to go, he had brilliantly and lovingly fulfilled his purpose.

This morning, at 1:30 AM, the hour of his passing, two friends joined me from England and France on zoom for a ritual and vigil I had created in homage to him.

I lit three candles for Jack, me and our marriage. I read my gratitude, some of my poetry and played the middle movement ‘Goodbye Song’ from the “Quartet for Heather.” He composed it for my surprise 70th birthday party in June 2019. If I ever feel low, all I do is remember that day and feel the flood of love I received. Little did we know that the next year would bring a pandemic and his death.

Here is part of what Jack read to introduce the premiere:

Thank you all for being here, and creating together, this magical evening, for Heather…

In the beginning of April (2019), after quite a long hiatus, I decided to compose again.

Heather naturally assumed that it would be another orchestral work.

So I let her believe that.

The work is called simply, “Quartet.”

And I decided to have its premiere performance right here, as part of this surprise party for Heather, and to dedicate this work to her.

The performers are not only fabulous musicians as you will hear…they are our friends. 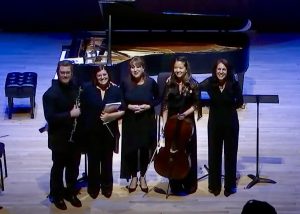 On April 18, 2021, Baya Kakouberi, piano; Rosana Eckert, treble voice; Jonathan Jones, clarinet; and Jennifer Choi, cello, with Jack’s daughter, Jennifer Waldenmaier Harper, replacing him as the conductor, performed the public premiere in a Voices of Change concert. Artistic Director, Maria Schleuning, dedicated the concert to Jack and his decade of service on the Board. You’ll find the Quartet for Heather in the concert at minute 1:08:00. The second of the three movements is the Goodbye Song, one of the nine compositions he wrote for my ReWriting Your Future workshops in 2004. (The majority of them are very funny including The False Assumption Blues.) We couldn’t have predicted that, 16 years later, it would end up being his life’s goodbye song to me.

Many years ago, I wrote this about omarriage:

When a soul’s ultimate lesson is intimacy,

even over any mission to serve the world.

all else becomes secondary.

Now that Jack is gone, my calling becomes priority. I blew out his candle. I blew out our marriage candle. And I dedicate myself to my writing and teaching.