There are over 90 of Heather’s one-hour mentoring videos at youtube.com/heathercarlile 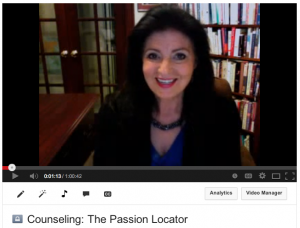 • ReWriting Your Future SM Integrating Personality with Purpose and Mission — Creator and presentor.

• Facilitating The Future is Now! retreats for various clients (including Hope’s Door and the Collin County Battered Women’s Shelter).

• Certified for Prepare/Enrich marriage enrichment and pre-marital assessment and seminar. 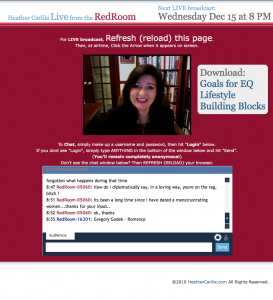 The Enneagram Personality Types for the US Army Yellow Ribbon Reintegration Conferences from January 2011 to present.

Relationship Skills and Lifestyle Mentoring via Live Q & A Weekly One-hour Broadcasts from the Red Room on the internet. February 2010 to February 2012 (see them on Heather’s You Tube Channel).

Cutting Your Saboteur Down to Size 4-part class, Dallas, Texas 2002

University and College DFW Area Consortium Career Centers: Career Advancement, I’d Follow My Bliss if I Knew Where to Find It! seminar and talk 1998-2000.

New Directions Consulting Seminar: Management of Diversity in the Workplace 1998.

Instruct Graduate Psychological Testing class at Amberton University on use of the Enneagram for personality style assessment, 1998. 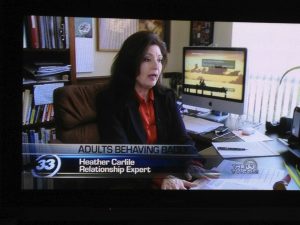 Interviewed and televised as topical expert by Channel 33 news in Dallas 2011-2012.

Interviewed and televised by NBC for The Today Show on marriage problems affecting health, Summer 2006.

Interviewed by and quoted in the Dallas Morning News, on Journaling, August 2005.

Interviewed and quoted on the Oxygen channel; Success in Marriage Counseling, August 2001. 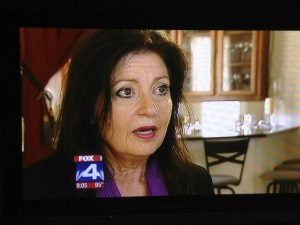 Interviewed by and quoted in Dallas Morning News 6/22/01 in You’re Not Invited: Although weddings are meant to unite family, more couples are leaving parents off the guest list by Karen Rangel. 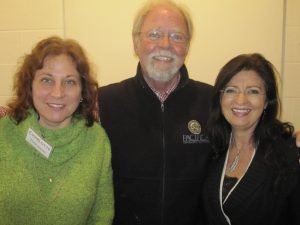 The Biology of Belief with Dr. Bruce Lipton, Breckenridge, CO 2007.

The Hogan Center for Performance Excellence: Leadership Skills for Executives 1999.

Certification as Ethics Trainer from the Josephson Institute and Character Counts! Coalition 1995.

B.F.A. (by audition) in Drama from University of Alberta, Edmonton, Alberta, Canada 1972. 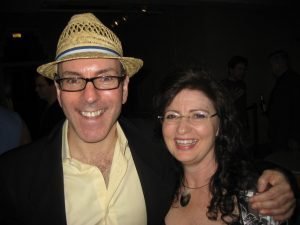 Board Member, Secretary, Voice Over for WRR 101.1 Radio Spots 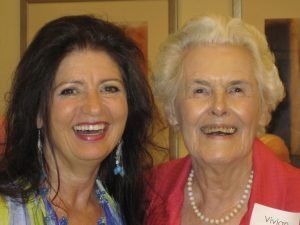 Coordinator of over fifty Presenters for the Women’s International Peace Conference 9/9/99 for Peacemakers, Inc. Dallas.

Certified for Mental Health Disaster Services by the Red Cross 1997.

Assistant to United Way Coordinator of Dallas Coalition on Character and Values 1995.

Support group facilitator for families of victims of Alzheimer’s Disease 1989-1991.

Publish newsletter for the North Metro Counseling Association 1993 to 1996.

Assist with registration for the annual Texas Counseling Association convention.

I have three wonderfully-married Step Children and five Grandchildren: Donovan, Suzie, Rocky and Joshua and Paxton! 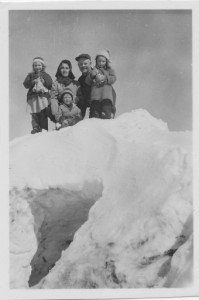 A bit of my story

I grew up in the wilderness and somehow never quite felt that I belonged there. I was the oldest, then my sister and then my brother. I was a voracious reader…I was able to travel the world and cultures in books. My most memorable book from school days was “Sir Edmund Hillary’s Ascent of Everest.” I think it was part of being born to a pioneering farm family. And, I notice that I often make choices which keep me innovating, inventing and making stuff up.

I felt I was born too late…I wanted to be Sarah Bernhardt or be in her Parisian salon or be in the group surrounding the Impressionists. But, I am now thrilled that our times and my life are even more exciting.

My art teacher took my work to show to other schools and I never got it back. I returned to painting as a stress management method after grad school and discovered my ability with watercolors, graphics and art. 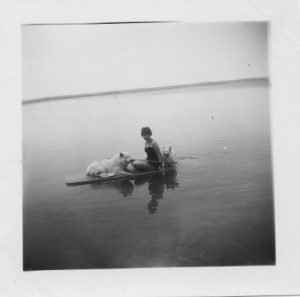 On still Grieg Lake with the two dogs.

I loved the sound of Loons calling across the early morning mirror-calm lake when we spent time in our tiny summer cabin. My reverence for Nature softens and expands me. I love walking on the beach. Feels like an indulgence to immerse in such private time. And as in childhood, our cats are an ever-present delight.

I left the farm for the BFA Acting Conservatory in Edmonton – and it took me decades to adjust to city people, bus routes and traffic. Now, I’m a city girl in my bones and have deep roots in our Dallas home.

I sang in the choir and two guys from high school, Gary and Brian, and I, formed a trio…they played guitar and I sang folk songs…our ultimate audience was the local Rotary Club.

After my move to Dallas, I was the only female draftsman for an engineering company just before CadCam. I loved my drafting table and the quiet technical drawing that gave me an income. I really like technology and especially my Apple computers and iPhone. 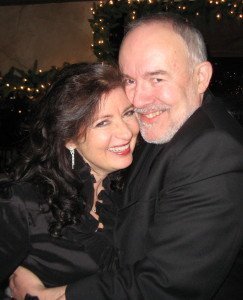 Heather and her husband, Jack Waldnmaier

When I fell in love with Jack, I couldn’t stop writing poems to him.

Even as an extrovert, I crave solitude because it’s a relief from my drive to be responsible, helpful and respectful to others. It has resulted in endless amounts of files on my computer so that I shall always be busy working on my next book, article or script.

I entered the world of psychology at 40 years old, after four years of seeking a career which could keep gaining meaning on into my future. Nearly three decades later, my work is even more meaningful than I could have dreamed. I continue to be impressed with the Enneagram Institute.

These days, in my ’60’s, I often notice that I am looking through ‘new’ eyes, seeing from a different viewpoint, almost as if I am another person; and I feel the experience of entering the Ruler/Magician stages on The Hero’s Journey. It’s interesting, curious and makes me wish I could have worn these ‘glasses’ decades ago. But, I am aware that my personal dreams have come true and that my future calls me to make a difference for more people. My private practice, presentations, the internet and my web presence opens doorways continuously.

Life with my husband, Jack, our family and our friends continues to reveal ever more conversations, individual & mutual creativity, discoveries, beauty, fun and, ergo, more gratitude and more to love.