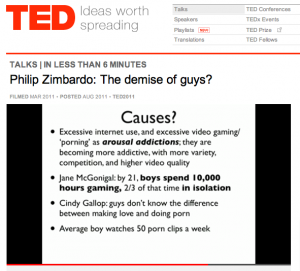 “So today, I want us to reflect on the demise of guys. Guys are flaming out academically; they’re wiping out socially with girls and sexually with women…I think it’s excessive Internet use in general, excessive video gaming, excessive new access to pornography. The problem is these are arousal addictions. Drug addiction, you simply want more. Arousal addiction, you want different. Drugs, you want more of the same — different. So you need the novelty in order for the arousal to be sustained.

“Boys’ brains are being digitally rewired in a totally new way for change, novelty, excitement and constant arousal. That means they’re totally out of sync in traditional classes, which are analog, static, interactively passive. They’re also totally out of sync in romantic relationships, which build gradually and subtly.”