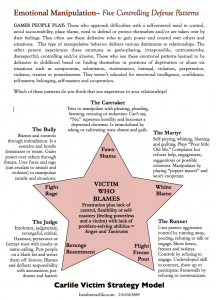 As a marriage counselor, I’ve worked with hundreds of couples. Each relationship is unique and yet I can describe four general patterns that are at the root of most infidelity.

POWER AND CONTROL: People compensate for under-developed emotional robustness by using defense mechanisms to achieve power and control over others. There are five major categories of being defensive or throwing tantrums with emotional victimhood:

The Five Types of Tantrums

VS The Five Types of Problem Solvers 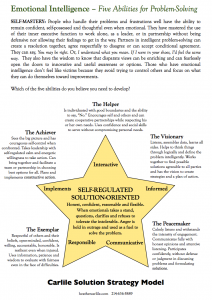 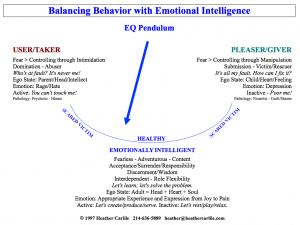 Two manipulative styles based on fear and control which create behaviors that are either too self-centered or too driven to please:

These Users and Pleasers play Dominator or Doormat in order to avoid living with emotional intelligence. They haven’t been taught how to handle and resolve hurts, guilt, grief, forgiveness and anger. They may have hardened the heart so that:

a.) sexual behavior is no longer connected with intimacy or

b.) the libido can be re-activated only after there is no risk of attack and the wounds in the heart are healed.

The Suit and The Artist: Jonathan was committed to providing for his wife and children. He was a bright executive and used to interacting with professionals at work in high-level problem solving. He valued intelligence, knowledge and solutions and he saw feelings as weak and useless. He was critical of Holly because she was too emotional for his taste and she seemed to be content to be a pleaser.

Holly was invested in the roles of wife and mother and didn’t engage in dialogue or conversations with him other than about parenting and running the household. Jonathan judged her as being less intelligent but a good mom. Holly was an artist and deeply sensitive. Her way of coping with Jonathan’s disrespect and criticism was to withhold her thoughts and avoid interacting with him verbally and sexually. She turned to her girlfriends for friendship and understanding.

Jonathan found himself stimulated by a social relationship with an outgoing and intelligent married woman. His fascination with her, despite his desire for fidelity to his wife, tipped his emotional affair into a sexual liaison.

To his surprise, when Holly found out, she cared; she was very articulate and passionate. She felt abandoned, violated and angry.

When they came for counseling, they weren’t sure if they wanted to be married. Our work revealed Holly’s intensity, intelligence and secret longing for emotional intimacy with Jonathan. She had been afraid of his rejection and hadn’t been open and honest with him.

As they worked with me in marriage counseling, they started their new openness and honesty in my office and they made some changes in their lives. Holly got a job in an advertising agency and felt more energized. She had more to share with her husband. Jonathan respected her actions and was willing to take Holly on dates and to engage in dialogue and conversation with her to see if they could find a peer friendship. As Holly opened up her thoughts and opinions, Jonathan opened his heart and soul.

They surprised me with the strength of their courage and empathy in the new emotional and intimate bond they built. For the first time, they became romantic best friends. And that, I believe, is an intimate relationship or a marriage.

For more details on Emotional Intimacy, you can watch my You Tube Video: youtube.com/heathercarlile 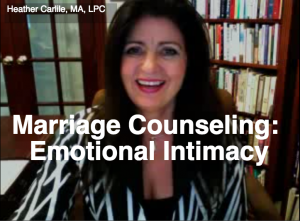